“Just North Enough to be Perfect !” 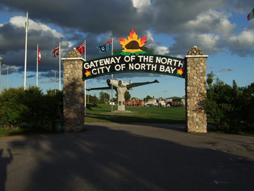 North Bay, “The Gateway of the North ” is Located in Northeastern Ontario, At the crossing of Highways 11 and 17, Just 342 Kilometers North of Toronto( about a 4 hour drive) with a population of 53,966 (2006 Census). Nestled between Trout Lake and Lake Nipissing, this vibrant community is full of Natural attractions: Multi use trails, Forests, Beaches, Streams,the recently saved from destruction Sweetman’s Garden and the North Bay Waterfront to name a few. North Bay takes it’s name from it’s position on the shore of Lake Nipissing and is the Seat of the District of Nipissing.

The surrounding area was first explored by Samuel de Champlain Although the First Nations were here Long before then (The First nations have occupied the area they call N’Biissing (little water) for approximately 9400 years. ) The Arrival of the CPR Railway in Callander in 1882 brought on a wave of activity for the area. In the same year John Ferguson chose the north bay of Lake Nipissing to begin a settlement. and in 1891 North Bay was incorporated as a town. North Bay has been known as a Railway town ever since The Temiskaming and Northern Ontario Railway Moved in in 1902.And the C.N.R. joined the fray in 1913, after the discovery of Silver in Cobalt.

Back in that day surveys were taken and plans were made for a Canal, The Georgian Bay Canal, But it never came to fruition due to financial constraints and ever changing transportation patterns. North Bay thrived with the three railroads as well as a very strong Lumbering Industry, and industries to support the Mining Sector across Northern Ontario. In 1919 John Ferguson was elected Mayor and in 1925 North Bay was Incorporated as a City.When the Dionne Quintuplets were born in Corbeil on the southern outskirts of North Bay, tourism possibly saved the city from some of the ravages of the depression. North Bay would lean on tourism heavily well into the 1960’s.

In January of 1968 North Bay amalgamated with the townships of Widdifield and West Ferris. From 1961 till 1972 North Bay was host to 26 U.S. Bomarc Nuclear Missiles. The Bomarc base,caused some controversy but the forces necessary for the maintenance As well as the large contingent of staff in the SAGE Complex and 422 wing bolstered North Bays economy.

North Bay’s current economy is a little more diverse, although Tourism is still a large part of it. North Bay is Home to Nipissing University and Canadore College, both very well Ranked Post Secondary Institutions. Also there is a diverse compendium of small to medium sized businesses catering to Markets like the mining or Lumbering Sector with many multinational companies making their headquarters here. Transportation is also a big factor in North Bay’s economy, with 3 railroads, The two Trans Canada Highways intersecting here (11 & 17) and we have the only International size Airport north of Toronto in Ontario.

This 1000 soft-seat performing and visual arts center includes the beautifully renovated circa 1929 Capitol Theatre and the WKP Kennedy Gallery. The Capitol Centre is open Monday – Friday from 9 a.m. to 6 p.m and Saturday 10 a.m. to 6 p.m. The gallery features a range of contemporary and historical art. Gallery is open year round, Tuesday through Saturday

From Canadore College, or from Highway 17

The 750 hectare campus has miles of all-season trails. The network goes past Duchesnay Falls, which roars during spring flood and has many scenic overhangs the rest of the year.

This festival celebrates winter, and is organized by the city’s French community.

Take a 3 hour or 6 hour boat cruise of Lake Nipissing, to the Upper French River, on the south shore of the lake. Tours include a film presentation. Trips made mid-May to Labour Day.

The Dionne Quintuplets in 1934 became the first quintuplets ever born in Canada, and created a Depression-era media frenzy. They were put into the care of the Province by legislation, and became a major tourist draw. The original Dionne farmhouse, made of logs, has been restored and furnished with Quints memorabilia. Open daily from Victoria Day weekend to Thanksgiving (October).

This scenic road winds along 2 km of shoreline parks, with access to marina facilities and sandy beaches on Lake Nipissing accessible at over 20 points.

This museum, organized in 1977 houses many relics of early lumber, rail, and steamboat days, as well as early pioneer settlement.

This hatchery is an intensive fish culture operation, raising brook trout, lake trout, and splake through the fry and yearling stages. These fish are then released into the area’s lakes and rivers. Open daily year-round except holidays.

Old World style ready for you!

Home Ready for you and inlaws